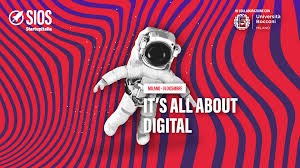 On December 14th, 5 pm, Giulia Ceriani in conversation with @Alessandro Diana-head of Accenture Interactive for @Accenture Italia  to discuss  #AI Conversational, on the main stage of #SIOS

The topic is the change of language driven by the appreciation that #voice-enabled technologies meet more than ever in consumer behavior: to get information, to make a transaction, to operate and control, to have fun and entertain, as a recent research from #AccentureInteractive clearly shows. I would say that what’s changing in the language is not the code (verbal, as usual), but the relationship with the device to whom it is addressed. Moreover, the need from which it arises.

From a strictly linguistic point of view long established (cf.P.Grice, 1975), it’s difficult to call this a conversation: hard to respect speaking to Alexa or Siri, i.e.,   the principle of a good conversational interaction as per quantity (not to be reluctant or redundant), quality (to be sincere), relationship (to be relevant), mode (not to be ambiguous). Hard as well for Alexa and Siri and their homologous. Violation of norms is around the corner.

The change is elsewhere. In the attribution of an anthropomorphic profile to the device despite from a voice timber not always so politically correct (female/male/genderless? young/adult/mature? Etc.), in the necessity to settle a dominant relationship with a device that should be, in principle, passively adequate to the functions we are demanding for. Or maybe, simpler, for the need to connect to someone that is still there to listen to us.

A few points to discuss, during SIOS talk and further…